i'm here again! i've been actually doing A LOT of work on oracle of secrets lately, which may come as a surprise to some. i've coded an entirely brand new menu for the game completely from scratch in assembly. i got help from a fellow zelda hacker with the general structure of the menu, but i did a lot of the design and heavy lifting in terms of coding myself. it now features two panels that you can switch between using the L and R buttons. the second screen is a quest status screen that includes various details present in vanilla alttp as well as new things completely original to my hack. i managed to include a text name for every overworld area which is pretty cool, as well as icons for four different ocarina songs which i'm going to be coding in. so instead of just the bird for flying, you'll have access to other songs as well! i've also got plans to replace the medallions and the magic cape with masks. i've got the deku mask, goron mask, bunny hood, and stone mask planned. hopefully this doesn't take too long in terms of development time. i've also been using zscream lately for overworld editing. it's really nice using the 16x16 editor instead of the 32x32 editor that hyrule magic has. while i've had aspirations in the past to fix hyrule magic, i've actually pivoted away from that goal as of recently to concentrate on helping zarby89 with improving zscream. despite having no experience with C#, the code is a lot easily for me to grasp refactoring and developing for versus the ancient hyrule magic with its win32api and magic numbers and strange design choices. not to say i don't appreciate the fact that it is written in C, just that it's more realistic for me to work on zscream where everything is encapsulated into objects and i can actually speak to the developer. so on top of more progress with oracle of secrets we'll likely be seeing a lot more progress with zscream as we push it towards a major refactor for version 3.0. i expect this to be a really good thing for the zelda hacking community.

here's a gif of the new menu in game, it's nearly complete i've just got some loose ends to tie up and features to finish. if you'd like to look at the assembly code (though not sure if anyone actually will) here's a link to a github repo of it i have uploaded ==> oracle menu repo

wow it's been awhile since my last post, sorry! i'm always thinking about this game though. i've been working on planning the post game, so i figured i'd share those thoughts and give an update as to my progress (or lack thereof) on the hack. so i've been working on how i'm going to change the trigger and dialogue for the fortune teller, making her into an assistant for farore that sits in the hall of secrets and gives you advice along the way. it'll functionally be the same where you pay rupees, get a hint, get healed, etc. the fortune teller will now be instrumental in accessing the second quest. since oracle of secrets doesnt use dungeon maps, the item is being reimagined as a collectible stone tablet, much like parallel worlds. upon collecting a tablet from each dungeon (and probably the mini dungeons) you'll have the ability to speak to the fortune teller about them to trigger the second quest.

the premise is simple, being that this is oracle of secrets and canonically after the other two oracle games, link has been away from hyrule for quite some time. alluded to in the intro sequence by farore, he just wants to go back home and see zelda. so the tablets will reveal a spell that allow link to return home, but of course it's not that simple. the player will have to traverse through a substantial overworld section, complete with intermediary dungeons connecting different areas, and a flurry of bosses from the main game to rematch. this will be an opportunity for me to reuse some existing graphical assets and perhaps implement new ones in a more abstract manner to put an emphasis on challenge. it'll likely take up about a third of typical overworld space and whatever leftover dungeon rooms i have will service it. after progressing through these challenges the player will return home to zelda in her castle courtyard and get a true ending to the oracle games.

the game and this ending in general don't do an incredible amount of tie-in to the original oracle games outside of passive references. i don't want to allude to the game linking aspects or the witch sisters resurrecting ganon, since i think that outcome is one of those "timeline split" type events where the player doesn't necessarily always do that in every universe. so think of this as a non-deterministic sequel to the oracle games in which link is on a quest in a foreign world aiding farore against an evil force. the assumption is that oracle of ages and seasons happened, but not to a point where i attempt to include some cheap linking gimmick. 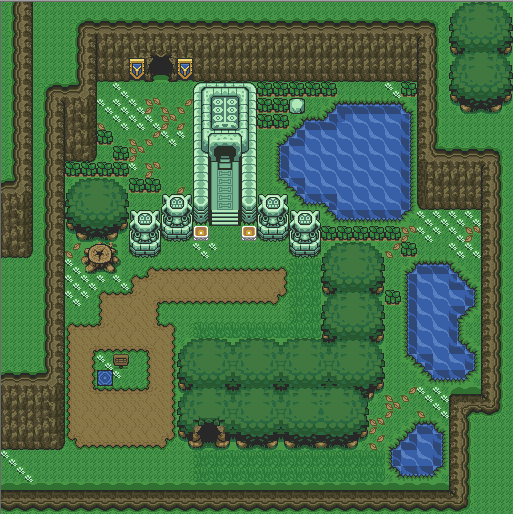 i finally got it within myself to work on the rom hack today. it wasn't a ton of heavy lifting but it was productive. i worked on exterior areas of the castle as well as finishing up some nature areas. i wanted to go for the tall grass in front of the castle to add to the fact that the royal family abandoned it and it is no longer upkept. the bottom left area is south of the ranch and i thought it would be cool to have a winding road and a bridge leading up to the ranch. i've been replaying majora's mask and want this area of the game to give off a similar energy to the romani ranch in that game. there's a hotel to the northeast of that location i'll probably show off soon once the map directly easy of that one is finished. the bottom right area is east of the beach and i showed it off in an earlier blog post but i fixed the graphical errors. 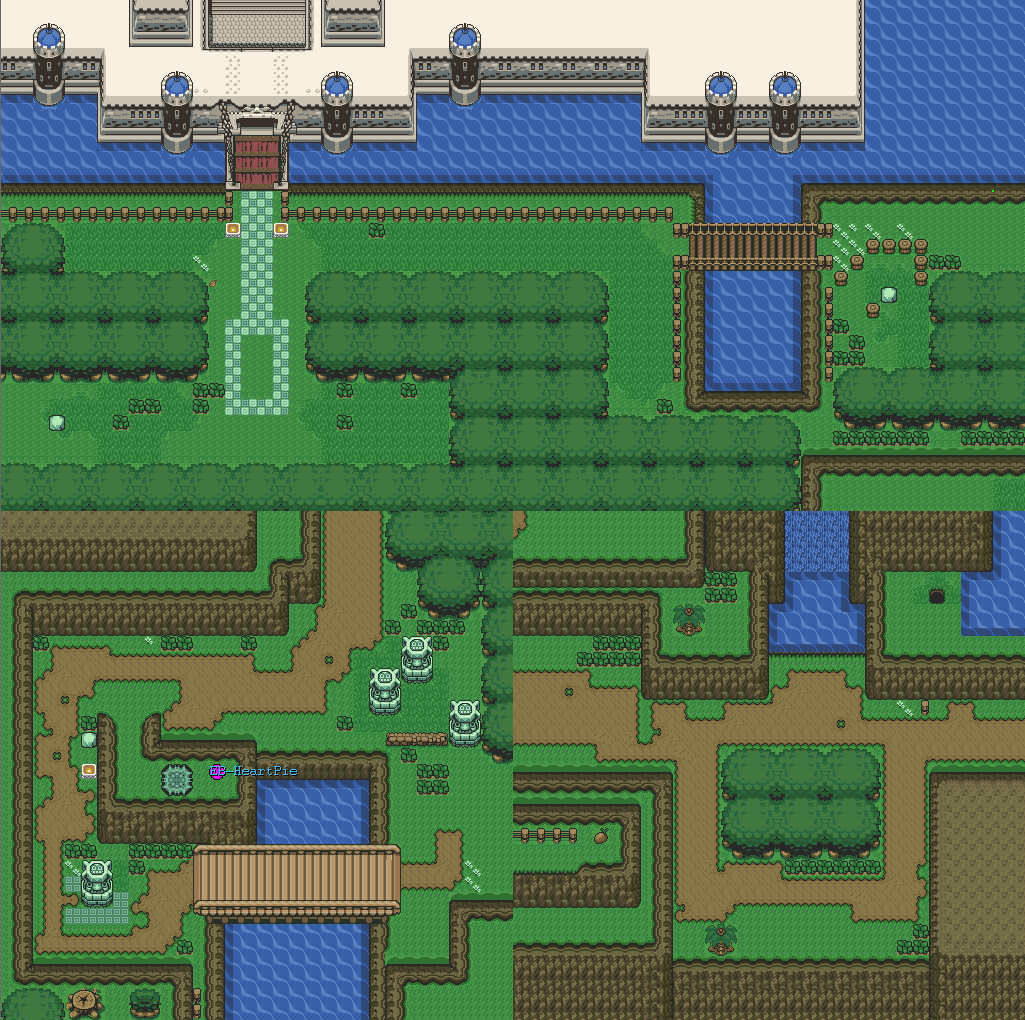 i've started doing some physical mapping on graph paper of the dungeons so that i can better visualize the work i'm doing on them. 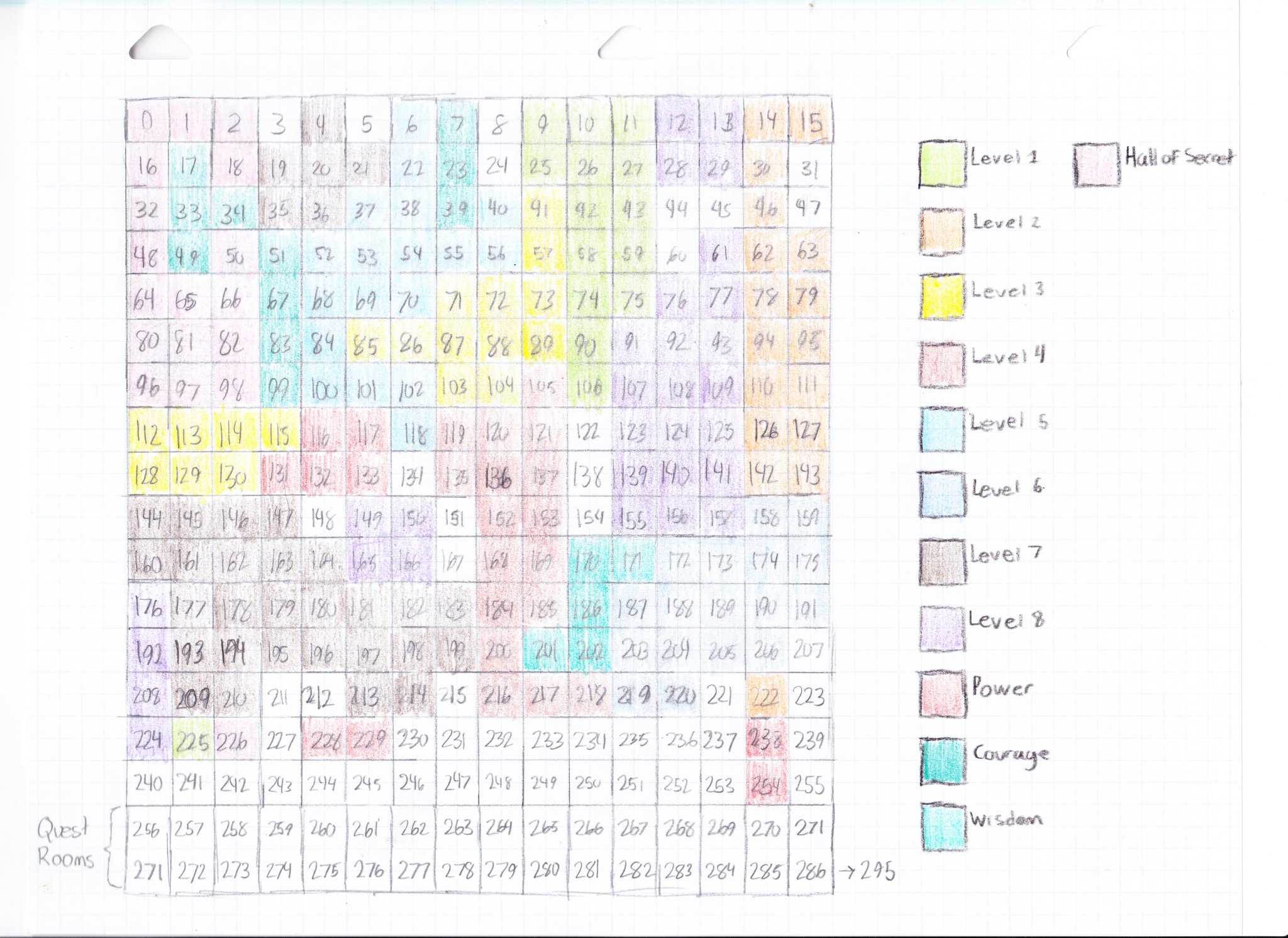 this isn't 100% final but it's a pretty accurate look at the size and room allocations of the dungeons. level 7 is the largest of them all but since the remainder of the hall of secrets will be included shortly after level 8 so i think it will balance well. if level 7 proves to be too large though i may chunk off some of that space for the "post-game dungeon" though this whole idea is still kind of up in the air.

i worked on a small area east of the beach to continue the work i was doing in february. it will make this year a rather productive one once all is said and done in terms of overworld adjustments. there's a few areas around the castle that still need to be reconstructed basically from scratch now. the only reference i have is the areas surrounding them. 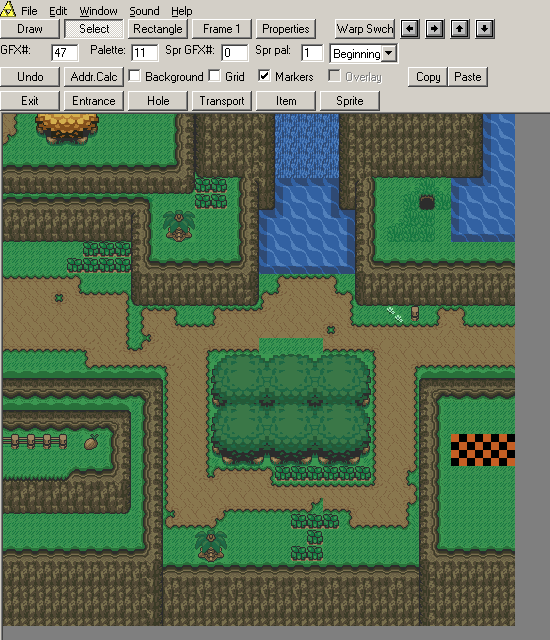 large amounts of work were done on level 5 in the middle of 2017 that is being picked up on right now. one of the central rooms had a very shaky staircase bug based on some poorly done BG2 elements so i had to clear that entire room and have only just now started plotting out how i'd like it to look. a lot of the elements of the original dungeon design will remain but i'm trying to make it feel more connected and less teleport-y. it's the water dungeon with the fairy flippers so i'd like it to be one of the more unique to explore.

level 6 also has the fundamentals for the beginning laid out and blind chosen as the boss with a few rooms where the blind boss is hiding (100-102, miscolored in this scan but the blues are so similar anyway) but much of it is still empty. the ice dungeon will be more of a lore establishing area than a huge gameplay behemoth. level 5 will definitely have some insight to the story but level 6 will be where things start to make more sense. ive been building on ideas over the last few years in my head and im really starting to see how this story can play out in an interesting way. i think everyone will enjoy my ideas.

today i am finally taking a stab at debugging and learning the hyrule magic codebase that MathOnNapkins has been working on.

i've been reading from my c textbooks and trying my best to wrap my head around program structure. ive been looking at it for a few hours now and have established the "main" function where the processes all begin, WinMain. this is located in the main project file z3ed.c which was originally the entire program until MoN refactored it into several modules. 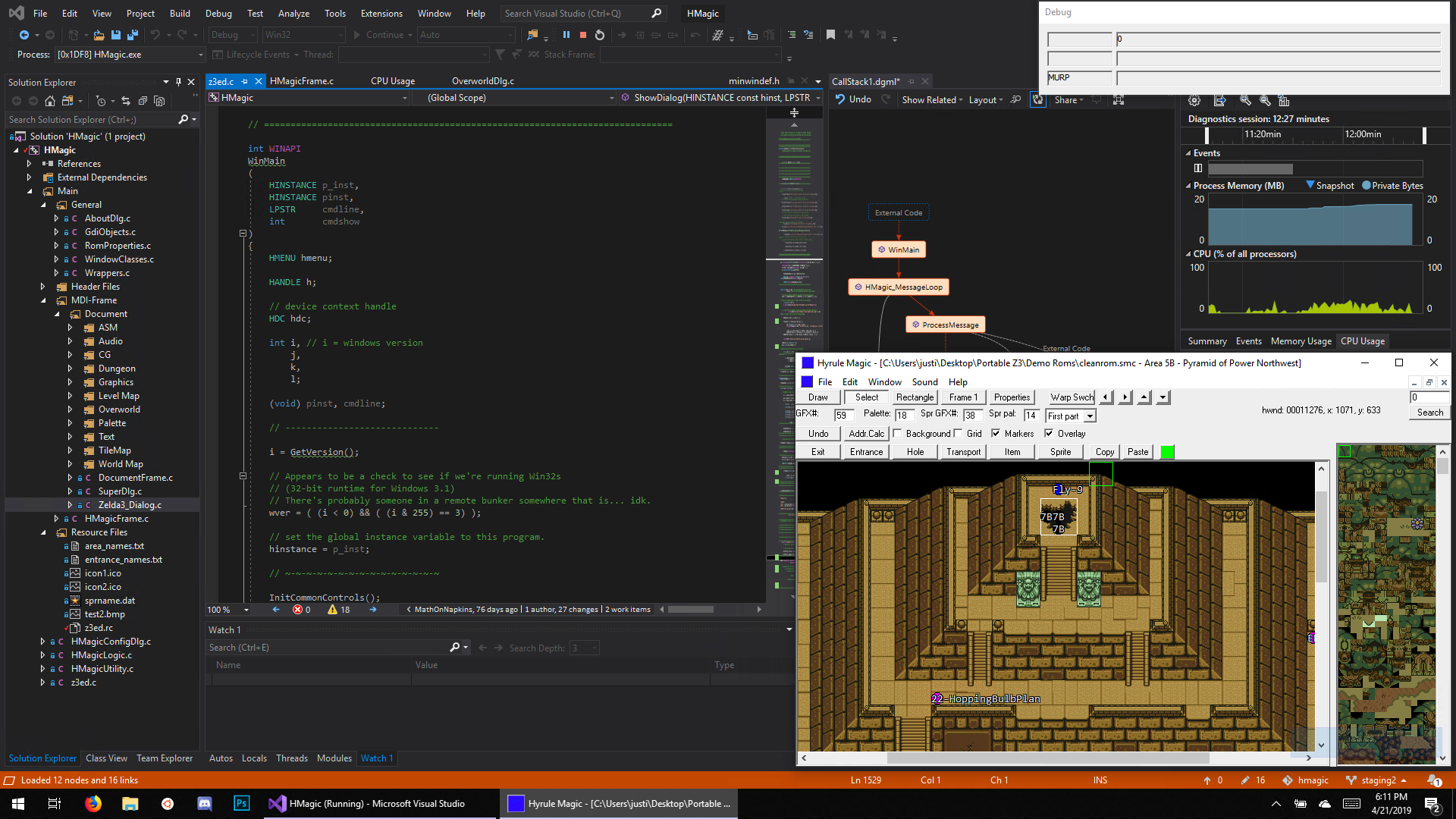 as you can see in these screenshots there are some small changes made to the program by MoN such as the icon font, the new coordinates string on the editor window, new highlighting around selected objects 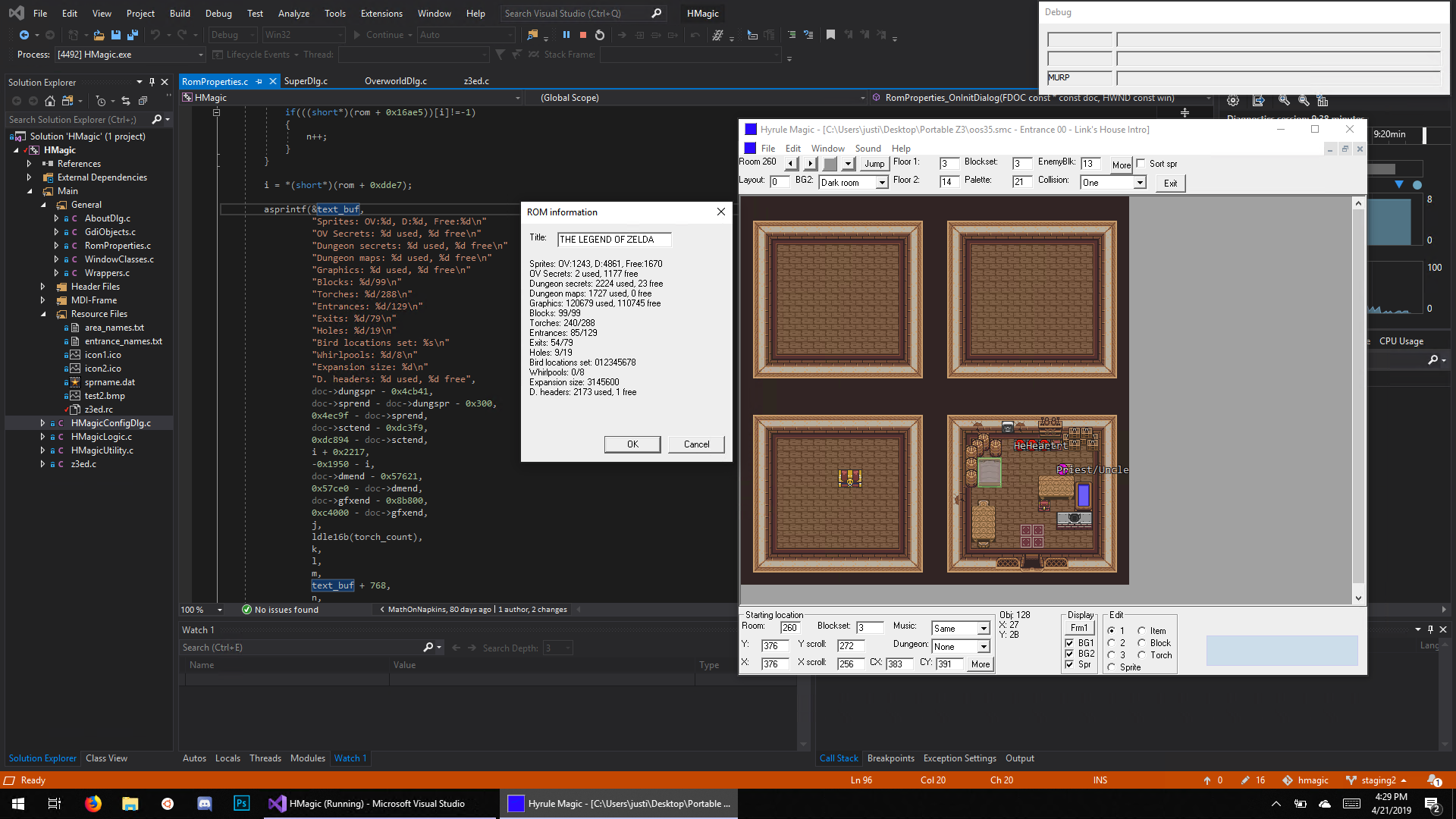 miscellaneous functionality like this properties page for example have also made their way into their own files which is very convenient. while there isn't much official documentation on the codebase yet there is a very well organized solution in front of me.

plans for the short term

This page has been converted into an update blog primarily now. The Progress, Screenshots, and Credits section will continue to be updated as well. Since the last update I've switched the location of the castle and the ranch while making other heavier overworld edits now that the layout is changed. I've also been diagnosing problems with the 4th dungeon miniboss. I want to deal with this issue before I move on to completing the 5th dungeon. After the 5th and 6th I believe it may be necessary for me to take some time and work on miscellaneous dungeon rooms like caves and update them. Many areas still largely resemble the original Link to the Past and this is a chore that needs to be done at some point anyway, as I plan on this being a full overhaul.

While not related to my hack specifically but Zelda hacking as a whole, I recently started talking with MathOnNapkins on the Link to the Past discord group and have been looking over the Hyrule Magic source code that he has been working on. It was originally written from 2001-2002 by sephiroth3 and now MathOnNapkins has been recoding and cleaning up the source from one large C file into many different modules and fixing the bugs it has as well. I'm learning C and trying to help with the code. Hopefully, I'll be able to add my own special features one day when the code is cleaned up and have a custom branch of Hyrule Magic.

MSU-1 allows you to play CD quality music in an SNES game. The MSU-1 soundtrack is a goal, but not a priority. 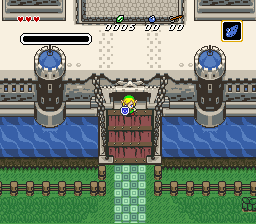 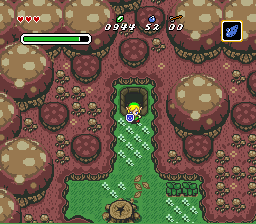 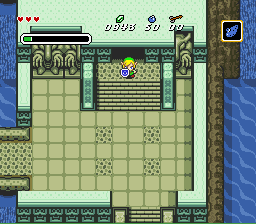 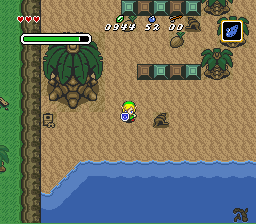 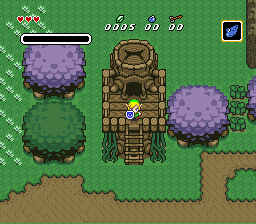 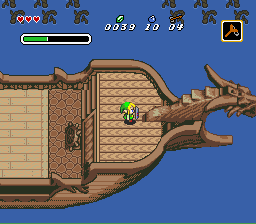 You may know me as moegami, my rom hacking alias as the kids call it.